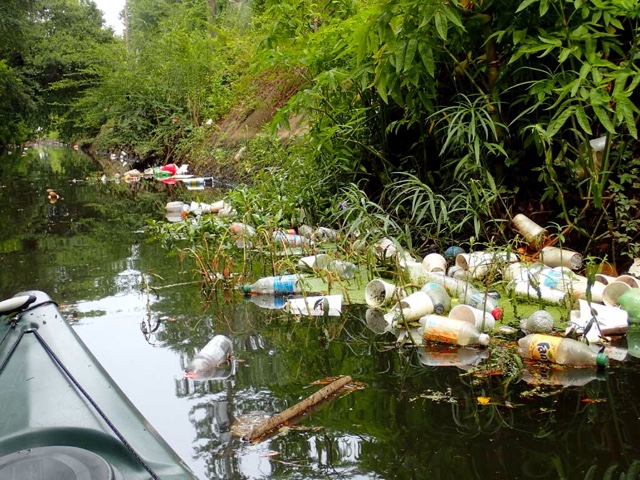 This is what kayaking in Mobile's Trashy urban waterways is like. Sadly, this is after 5 years of filing complaints about the City's waterway trash pollution problem to the City of Mobile and to the Alabama Department of Environmental Management. 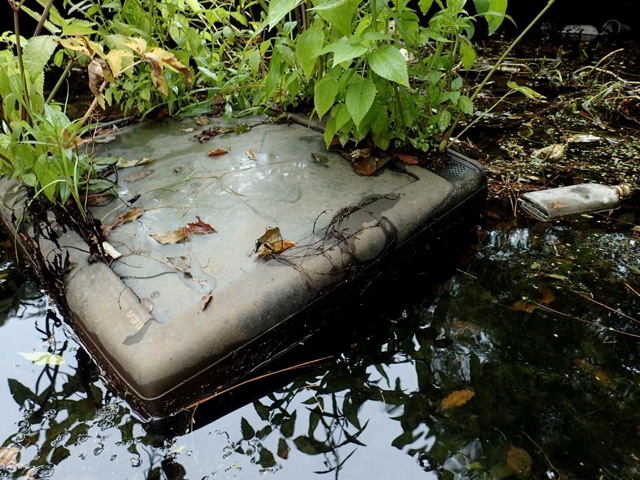 Insanely, the Alabama Department of Environmental Management (ADEM) sets no limit on the amount of litter and industrial trash that a community puts into its public waterways.
You heard right. In Alabama if the surface of a public waterway is completely covered with trash (some of the trash toxic), ADEM does NOT consider the waterway to be polluted. That is retarded. 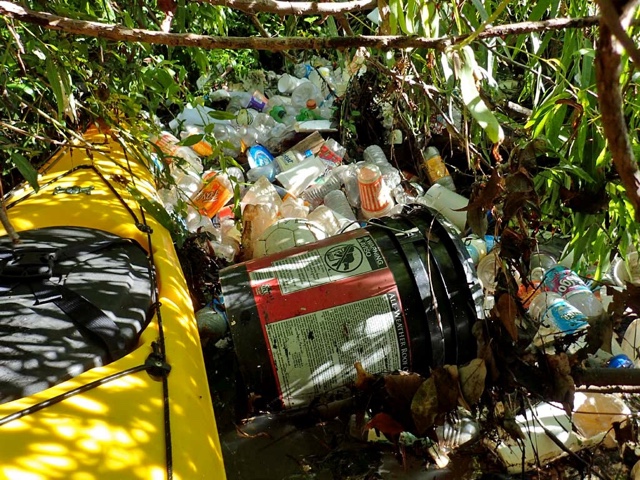 Even though technology, growing at a leaps and bounds pace, is making life easier, the level of human intelligence continues to spiral downward just as fast.
Posted and Copyright by Rob at Thursday, July 21, 2016 3 comments: 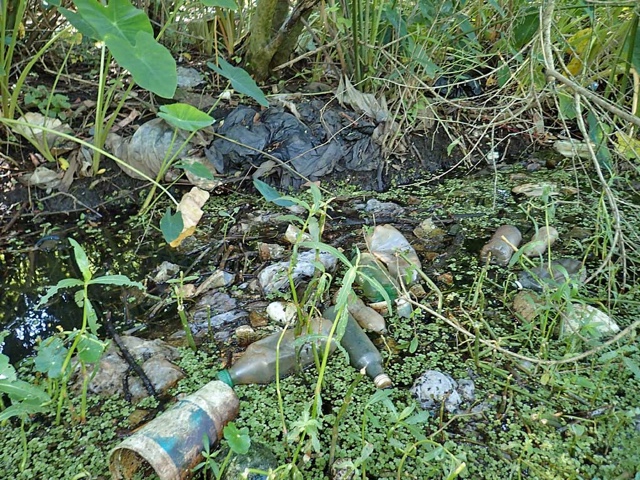 Coating the public waterways and shorelines in Mobile with Plastic.
Posted and Copyright by Rob at Tuesday, July 19, 2016 2 comments: 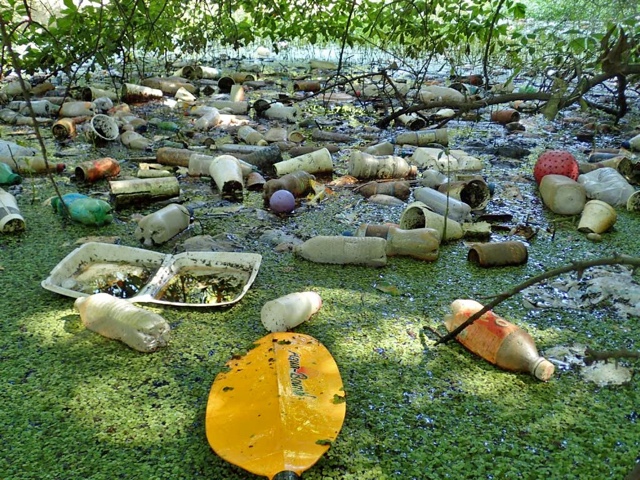 After almost 5 years of filing complaints to Environmental Enforcement Agencies about the trash pollution in Maple Street Canal, how is the Canal looking today? The only change is the trash pollution is denser. That is unacceptable.
Americans, at least most of the ones in Alabama, obviously do not give a damn about the integrity of their marine environments. Alabama leaders should be arrested for ignoring waterway pollution complaints and sent to Jail beginning with ADEM's Water Division Chief Glenda Dean and Mobile Mayor Sandy Stimpson.
Posted and Copyright by Rob at Sunday, July 17, 2016 1 comment: 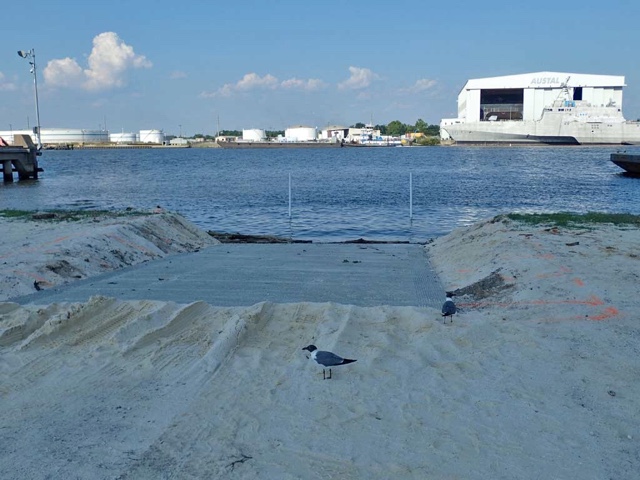 Newly poured concrete of a boat ramp at the Mobile Convention Center. Public Boater access to Mobile River in downtown Mobile has been non-existent up until now. The Mobile City Council apparently saw fit to approve this boat ramp at the Convention Center by a parking area that is usually empty. I have long said the small unused always trashy shoreline at the Convention Center was a wasted City waterfront asset.
The BIG question is whether this new boat ramp will be open for public use or whether this boat ramp on City of Mobile property is strictly for the use of Duck Tour boats... If the public is not allowed to use the boat ramp the Mobile Convention Center shoreline will continue to be a wasted waterfront asset. [Update: A City official confirmed the new boat ramp is NOT allowed to be used by the Public.]
Speaking of Duck Tour boats, it will be interesting to see if Duck Tour Boat use in Mobile will be successful. In Boston, Duck Tour boats (amphibious vehicles that operate both on land and in the water) operate in the sheltered area of the Charles River meaning pretty smooth rides.
Duck Tour Boats in Mobile will be operating between Battleship Park and the Convention Center. I assume the Duck Tour boats will be going around Choctaw Point to get up into Mobile River. That is an area often quite choppy due to the interaction of water current in Mobile River meeting typical winds out of the south being channeled up into Mobile River.
Plus, barges and boats sometimes leave sizeable wakes in Mobile River. Since the shoreline of most of Mobile River in the downtown area is bulkheaded, wake waves reflect off bulkheads and each other causing quite a washboard like chop at times.
From what I have read, the freeboard on Duck Tour Boats can be as little as a foot high. In that case, high waves can come crashing into the boat soaking people. Can large amounts of water crashing inside a Duck Tour boat sink it?
Plus I read where Duck Tour Boats are slow boats barely able to do 5 mph. The water Current coming down Mobile River can be as strong as several mph after heavy upstream rains meaning it could be tough for the Duck Tour boats to even go up Mobile River.
My pessimism predicts the soon to open Duck Tour Boat venture in Mobile will have some disasterous times ahead. Or it will be a money losing venture as people write bad reviews. Who wants to wait for 20 minutes for a parked train to move in order for the Duck Boat to get into downtown Mobile to do its land based tour? To be continued...
Posted and Copyright by Rob at Tuesday, July 05, 2016 1 comment: 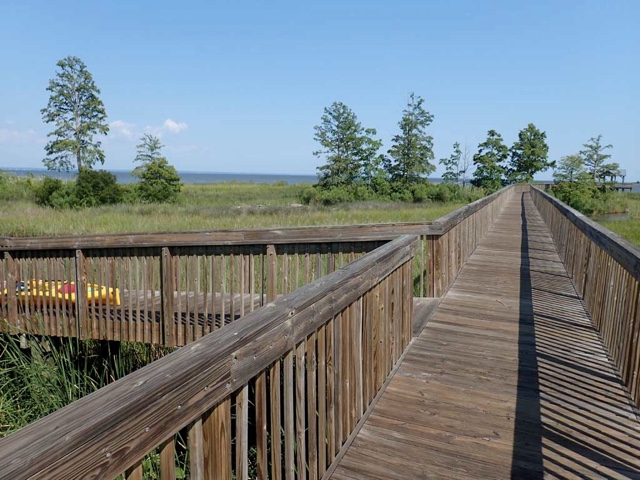 First problem with this Engineer designed ADA accessible ramp to the Kayak launch at Arlington Park in Mobile is a narrow 90 degree turn on a boardwalk that has high sides. Two people carrying their kayak by typical handles cannot get the kayak to the launch without hoisting the kayak above their shoulders. 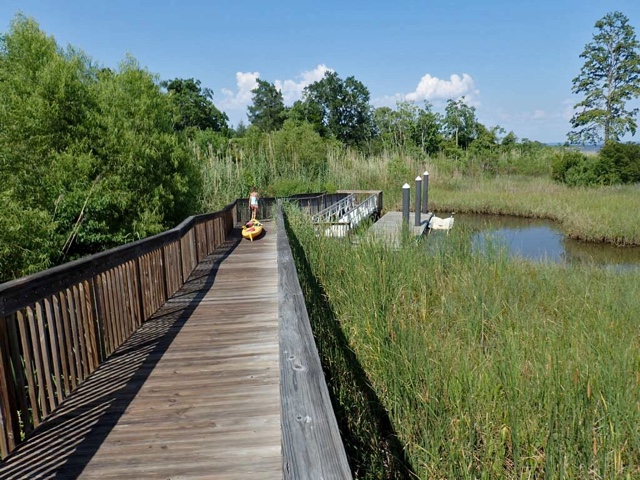 After making the frustrating difficult  first turn this girl drags her Kayak down the ramp only to face dealing with 2 more difficult turns, both of these 180 degree turns. 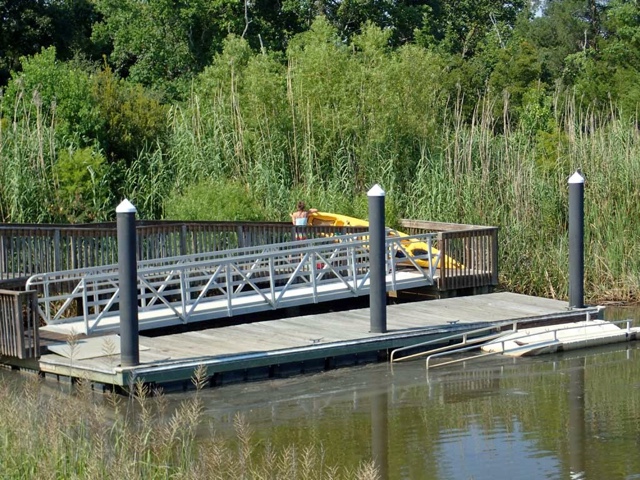 She struggles in the 100+ degree heat index temp to hoist her kayak above the railing in order to get past the first 180 degree turn.
What should have been a quick 2-3 minute drag of her Kayak down the 100 yard ramp to the Kayak launch platform turned into a 20 minute nightmare for this girl. I helped her move her kayak the rest of the way which proved to be even difficult for two people. She could not believe the stupidity of the ramp design. She is right.
It is bad enough that the stupid ass engineer never considered normal transport methods of kayaks in the design of the ramp to the kayak launch. Using kayak handles or a kayak dolly are both normal methods of moving a kayak. This stupid ramp does not allow the use of either normal kayak movement method.
What is even worse is the engineer and authorities know this kayak ramp is poorly designed and downright dangerous but have never fixed the flaws. All that is needed is a secondary ramp without high sides following the ground contour to the platform. Until that happens kayakers will continue to struggle when launching at Arlington Park.
Someone is eventually going to get severely injured or die from a heart attack using this ridiculous kayaker unfriendly public kayak launch. I hope anyone that gets hurt sues the hell out of the engineering firm and the park owner (City of Mobile).
Posted and Copyright by Rob at Sunday, July 03, 2016 3 comments:

Rob
Earth has limited air, land and water. Earth is the only spaceship humans have to live on in this Universe. We better start taking care of our living spaceship or the consequences may not be good for the human species.